Best Practices for Transitioning In House 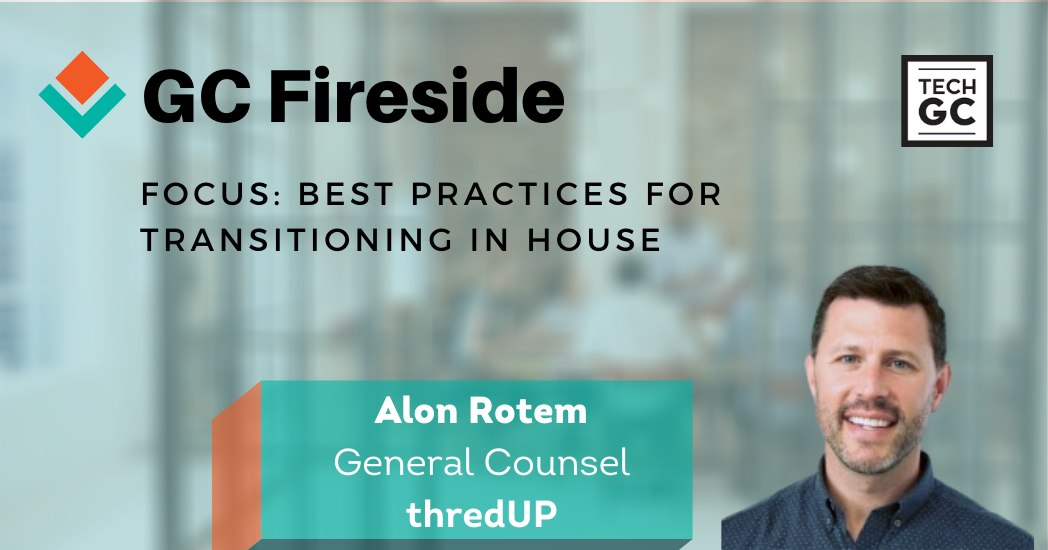 Why did you move in house?

I actually liked practicing law in a law firm environment and I enjoyed developing great relationships with clients, peers and partners.  But I was always extremely curious to know more about their business issues.  After watching so many of them scale these ground-breaking businesses with some envy, I knew it was a matter of time until I was going to make the jump in-house.

Looking back, I think I would pay less attention to the amount of money the company raised and much more attention to the culture they have built as well as the fundamentals of the business and the root problem they are trying to solve over the long run.

What was the lifestyle transition from law firm to in house?

The lifestyle is easier to manage for sure.  For starters, there is only one CEO that I have to answer to ;)  I also have a good sense for when the busy periods are going to hit which allows me to plan my life in a way that is less taxing on my family.  But I do miss the serial dopamine boosts that came with closing deals all the time.

At my prior GC gig, I was a solo GC and even now my team is just three lawyers -- so I also miss just being around a bunch of my legal brethren.   I enjoyed “commiserating” with my tribe in the law firm setting because we had this unique and intense shared experience.  In fact, my law firm crew still gets together regularly to rehash the good ole days.

What were the financial considerations of moving in house?

Yes, there was a cash cut but because I had not yet made partner, it was not substantial--especially if you calculate it on an hourly basis!  That said, if you can survive (and even enjoy yourself) at a big law firm, then it is a steady path to financial success -- even by Bay Area standards.  I think the in-house game is a tougher financial slog.

But to attain career satisfaction, you have to prioritize how you actually want to spend your time in the long run.  Career decisions shouldn’t be made strictly because of financial prospects. My advice is to try to build a career that you love over the long term and the money will follow, eventually.

How did you stand out as an in house candidate?

I wrote my fair share of cold emails and used every connection I had to get a warm introduction.  Another thing I did to separate myself was publish an article called “5 Traits Tech Startups Should Look For In Their First GC” on Linkedin -- can you imagine how self-serving that article was!!! Seriously though, I heard from several interviewers that this article was very useful because it served as a personal statement about my skills and values.

What were interviews like when you started looking at in house roles?

Every role I applied for was for a company that did not yet have a legal department. The interviews were generally structured as ½ day sessions where I would interview with three to four people across the organization (finance, marketing, engineering, operations etc.).  If things went well, then there would be another round with more folks.  Most of the questions centered around why the company needed a lawyer at this stage and how the legal department would interact with their group.  I found that preparing a “First 100 Days On the Job” agenda for them provided enough material to spark a healthy dialogue about the legal function and my point of view.

How did you prepare for interviews?

I studied up on the company’s business through their website and recent press clippings.  I also gleaned information on their competitors to get a better sense of their industry.  You’d be surprised how many people show up to an interview without the basics of the founding story, fundraising history and business model.  From there I studied everyone’s biography and learned whether we had any common relationships or experiences. I also did mock interviews with friends and family and researched common interview questions online.  Preparation is key.

I’d add that interviews are still very much about interpersonal chemistry.  For anyone you are interviewing, it helps to ask questions that show you are interested in their role at the company and how they think about the company’s future.  Just demonstrating intellectual curiosity and empathy will make you stand out.  Most interviewers will assume you know how to do “legal things” -- but they don’t assume you are going to be pleasant to work with or that you will make their lives easier in some way.  Show them how you will!

After landing an in house job, how did you prepare for the role?

Honestly, I don’t think I adequately prepared in advance before the role -- but when I got there, I made sure to meet as many people in the company as possible.  I asked them all about their roles and how they fit into the context of the larger organization.  My goal was to establish personal relationships across the organization so that I could really understand how it all worked.  From there, I worked with my boss to implement my “First 100 Days” agenda.  I also started meeting other in-house lawyers and going to legal conferences to learn from other GCs.  In-house lawyers are lifelong learners, aren’t we?!

What was the first learning experience you had after moving in house?

One strange experience was very early on in my first couple of weeks.  We were in an open office environment and I could tell that some of the employees were acting very nervous and guarded around me.  I quickly learned that they assumed an in-house lawyer was almost like an internal affairs police officer who might get them in trouble.  I had to convince them that I was less of a police officer and more of a private bodyguard hired to protect them and the company. That helped a bit, but ultimately, it was my willingness to dress up for Halloween that won them over. Don’t underestimate the power of a good costume!

Any final advice for associates looking to land an in house counsel job?

It’s not enough to love the product or the mission of the company -- its the people that ultimately make it a place worth staying.  Do your homework on the management team and the culture and the rest should fall into place.  Make sure it’s a place where you can learn something every day and have fun on most days.