The Industry Agnostic GC: How to be a Leader in Emerging Industries 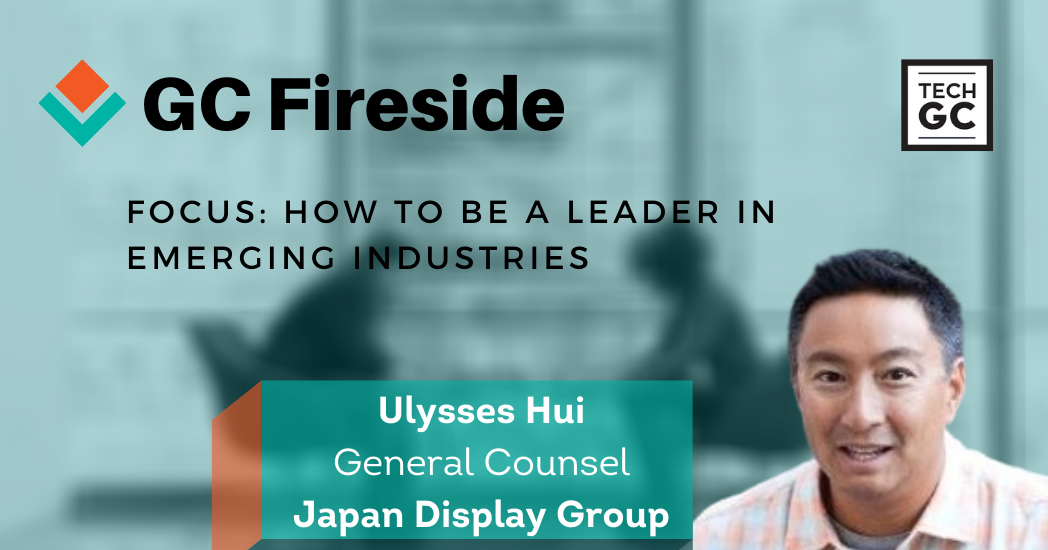 With emerging industries comes complex laws and regulations for GC's to manage. We sat down with Ulysses Hui, General Counsel of Japan Display Group, a publicly traded company with an over $40B market cap, to discuss what it takes to be the industry agnostic GC.

What's the story that led you to Japan Display Group, a 40B market cap company?

The backstory is that my company was an engineering-driven play. The engineers at the display businesses of Sony, Toshiba and Hitachi believed that they could be more competitive combining forces, in particular, their capacity and respective leading positions in LTPS (Low Temperature Polysilicon) display technologies and IP. But the combination would probably never have happened without the backing of a maverick investor, whose $1.6B investment facilitated the spin-off of the companies’ display businesses into a new and independent entity, Japan Display, with the aim of becoming a global leader in the field of small and mid-sized displays.

In 2012, a special purpose company was established to conduct the groundwork necessary for achieving a "rocket start” to integrate the three businesses under a flat and slim organizational structure. Believing the necessary legal expertise to support such an effort to be in the U.S., the company conducted a nationwide search here for an in-house counsel to lead and advise the global organization in the effort. I became aware of the opportunity through my client, Toshiba. At the time, I was in the IP Group at Orrick and things were going well. But I’m a bit of a sucker for compelling business stories. (I worked briefly for KKR out of college in part because I had read Barbarians at the Gate--I would never again see a microkitchen stocked with cartons of cigarettes.) Japan Display’s story, coupled with the opportunity to be a first time GC, was irresistible.

For me, it’s still all about compelling stories and bringing them to life. That might be the litigator in me or the reason I got into litigation in the first place. I entered law school thinking I might practice corporate law--I was an investment banker before law school and enjoyed classes in securities law and venture financing--but my favorite class was Civil Procedure! I don’t know how many in-house lawyers think of their jobs as bringing stories to life, but I think it is an essential part of the job that can guide effective legal advice and how you communicate it.

How did you align your legal team with the company roadmap?

I joined Japan Display Group as its first General Counsel anywhere. Our parent was newly headquartered in Tokyo, but the three legacy businesses had advanced manufacturing centers in Japan and Taiwan, assembly and logistics in China and Southeast Asia, and operations in various cities in the U.S., Europe and Asia. Our first mandate was integrating ASAP and preparing for IPO. That meant setting up global legal and compliance policies, corporate governance for a new organizational structure, new sales channels, new contracts and contract templates... all in multiple jurisdictions, and audit and risk management procedures for going public.

At the same time, we were rapidly growing our business, so I shaped our legal and IP teams to focus on supporting revenue growth, whether through strategic collaborations, business development, entry into new markets or market segments, or commercial relationships for new business and increasing deal velocity. Based on our innovative technologies, we were able to develop a who’s who of partners and customers (from smartphone, digital camera, wearables and VR applications for our small-sized displays to automotive, avionics and industrial applications for our mid-sized displays), leading to $9B in annual net sales. At one point, I thought if you’re not talking to us, you’re not serious about making a flagship product with a display in it. As mentioned, our organization is flat and slim. To contain costs, more senior legal roles are hired in the U.S., while more junior roles are hired in Japan. Over my seven years here, our legal and IP teams have expanded and contracted, but average around twenty counsel, which means I’m an expert in doing more with less.

What Advice do you have for GC's navigating through uncertainty?

My general advice is do your research and know your limits (and communicate them). I’m fortunate to have a great network of lawyers, both in-house and at law firms, and other general counsel and membership in groups such as the Bay Area Asian American General Counsel, which, like TechGC, are an invaluable resource and sounding board. When you need to retain outside counsel or expertise, do so and justify why. But learn the issues well enough to ask intelligent questions (can you explain it to your CEO or Board?) and make sound judgments. Your value add is managing and engaging outside counsel to inform your risk management decisions--those are non-delegable. Finally, it’s natural for innovation to push the envelope into areas without clear rules, precedent or consensus. In such cases, you can at least identify the potential stakeholders, including regulatory stakeholders, and generally applicable laws, e.g., consumer protection laws, or common law, e.g., torts, that may be relevant and prepare to tell your story in light of them.

‍
Additionally, if you’re going into a new area with a customer, you can often learn a lot by actively listening to them. For example, we work closely with Tier 1 suppliers for automotive and trucking companies to innovate new products, e.g., camera-based side-view mirrors, in a highly regulated and shifting space. Not only can you learn the lay of the land from your customers’ concerns, but, by learning the advantages of the new technology, e.g., no blind spots, significant savings in fleetwide fuel costs and less pollution, you can articulate why it’s a win-win for the public, who the regulators putatively represent.

What are the new and exciting industries to look at?

While my undergraduate background is in philosophy, I love all things science and technology. The nicest compliment an engineer gave me was, when asked about my lack of technical background, laconically replying there’s “no drop off.” In our industry, it’s a privilege to be a partner to innovation. For instance, we see VR pushing display technologies. We also work with electric and self-driving car makers and I’m particularly excited about the AV space, because it can be a gamechanger for so many segments of our society and economy, beyond mobility (see, e.g., Frank Chen’s “The Autonomy Ecosystem: From Self-Driving Cars to Beyond!). I’m also interested in public health, who isn’t now? In particular, we’ve generally done a good job fighting infectious diseases, only to see the intersection between infectious disease and chronic disease raise its ugly head in this pandemic. And I’m interested in fintech that democratizes finance and reduces friction, including for the underbanked, data cloud, devops, content moderation and speech... I could go on and on, but I would be remiss not to give a shout out to social venture tech like Code for America’s Clear My Record pilot.

What advice do you have for private GC's making the jump to public company GC's?

In the mid-90’s, I worked for a boutique investment bank (broker/dealer) analyzing securities and doing small-cap IPOs for tech companies. It was a much different time. We had high-school graduate stockbrokers passing cold call lists. We took one client public from the living room of my boss’s carriage house in Greenwich Village, when we were in between banking homes. The dog and pony show hasn’t changed, except I suppose they will be virtual now.

‍
I think GC’s, who often advise their boards and/or serve as corporate secretaries to their boards, can bring a lot to the table. If you are in such a role, you need to be the expert in your company’s bylaws and ensure they are being followed. I served on various committees of a nonprofit board, which was a great experience. Chairing the Committee on Trustees or nominations and governance committee was most relevant to corporate board work. Obviously, once you go public, the profile of your shareholders changes and your directors change accordingly. Orienting new board members to their role, especially those with less prior board experience, can be tremendously valuable. Finally, a number of public companies are rethinking their corporate purpose beyond maximizing profit for shareholders to generating long-term value for shareholders, explicitly including Environmental, Social, and Governance (ESG) factors in measuring the sustainability and societal impact of investment in the business (see, e.g., Business Rountable’s “Statement on the Purpose of a Corporation. This is a fluid area, where a GC’s guidance may well be a positive and prudent influence.