FinTech and Evolving to a Later-stage GC 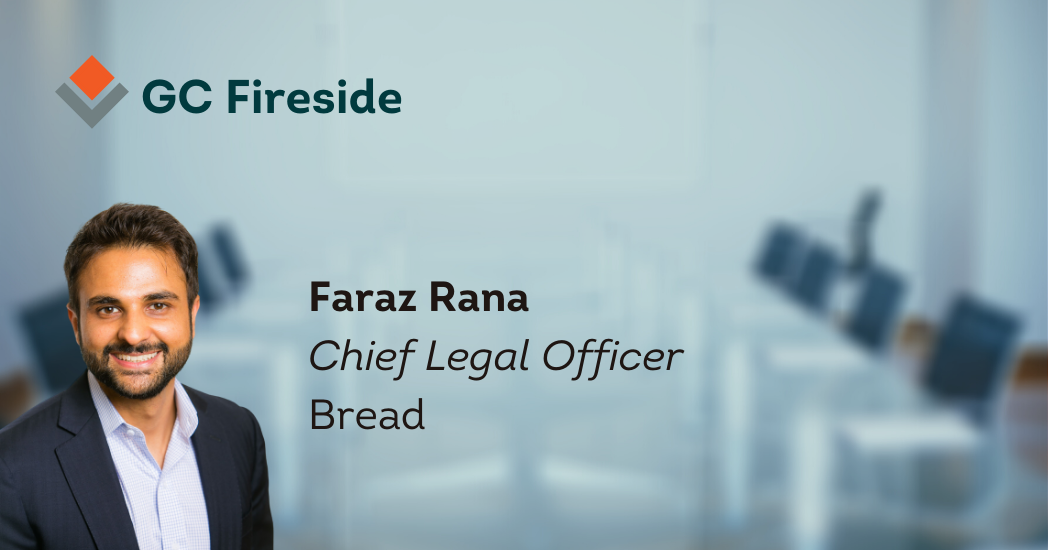 Many GC's struggle with the evolving demands of their role as their company grows. We sat down with Faraz Rana, General Counsel of Bread to understand his journey from early-stage to late-stage and to get his outlook on the FinTech industry.

Why did you decide to go into FinTech?

I would like to say I had some notion of how much fin-tech would grow but it was probably more a case of being at the right place at the right time.

In hindsight, it was the right professional decision for so many reasons after I left private practice. For a lawyer, fin-tech offers an instant seat at the table. There’s very little that gets done that doesn’t have a legal, regulatory, or compliance angle. For example, at our company, we negotiate complicated debt capital deals, have a regulated front-end consumer product, partner with banks, manage information security risk, and build and maintain a compliance program that supports a complex financial machinery. Add to that the many (and often evolving) federal and state regulations around payments and consumer finance and figuring out how to apply them to a tech product. That’s on top of the day to day normal legal governance with running a company.

So, it is never dull. Fin-tech requires subject matter expertise in a lot of different areas. The work you do as a lawyer juggling all these areas is really satisfying.

What are the key takeaways from your 5 years at Bread?

One of my key take-aways, and I guess career advice if you’re looking to move in-house, is that having a supportive CEO and a Board that recognizes the importance of a GC’s role is crucial to your success. I’m not sure I would have stuck around at Bread for 5 ½ years if that weren’t so in my case. If you’re job-hunting, make sure you ask the right questions. Why are they looking for a GC at this particular stage of growth? Is this a build-something or maintain status-quo type role? Are they willing to commit to a long term journey with you?

Also, working at a start-up compresses all sorts of timelines, including professional development. This requires constant reinvention.  I joined Bread when it was just the founders and a few engineers in a small room trying to launch a new digital product. My job number one, armed with only my laptop, was to figure out the legal structure to help us launch the product.

Since then, we’ve grown to several departments across two offices and a vast network of partnerships and advisors.  In that time, I’d say I’ve gone through a dozen or so rewrites of my own job description. The constant zooming out is not always convenient but is essential to making sure you’re keeping up with the culture and cadence of your environment, which can sometimes begin to move faster than you.

But, for me, this is also what has made working at Bread incredibly exciting and professionally fulfilling.

What do you see for the FinTech industry in the next 5-10 years?

I’m not really well versed in the crypto-currency trends so I’ll leave that aside.

Beyond some necessary consolidation, I think that fin-tech is still in its early stages. The reason, in my view, is that combining technology, finance, and regulation, all essential parts of fin-tech, presents a complex and novel set of issues. Finding solutions (and talent) that bridge all three areas is not easy.

Beyond that, the number of financial processes that technology can improve still remains astonishingly large. Just think about the number of things you do that involve some form of money, and how some of those experiences can be maddeningly clunky even in 2020.

Can you explain the evolution of GC from an early stage GC to a later-stage one?

I would highly recommend making the full journey because there are plenty of rewards once you get to the later stage. As an initial matter, you would have built everything yourself, and had a hand in what your colleagues have built. Being there from the start also helps you shape the culture so that you don’t feel like a square peg in a round hole later on as a GC.

To make the early stage worthwhile (or I think for any new role), it helps to have a vision of what you want your function to be. For me, it was ensuring that Bread stood apart as a tech company when it came to sophistication of legal and compliance oversight, with the end goal being building a brand that inspires confidence in a highly regulated space where compliance risks are top of mind even for the business folks. That maturity helps get us in the door to work with larger institutions, and allows the conversation to focus on growth, not risk.

This can then also morph from your department brand to the company brand. One of the things we consistently do are functional trainings for each department on how regulations impact their role, not as a way to scare off our business colleagues, but to arm them with the tools they need to be more effective both at their jobs and when they are communicating with external stakeholders. This then becomes part of the company DNA.

As a later stage GC, it's all about your team. You often work for your team, and not the other way around. My team is spectacular. Each person takes ownership of their individual roles. And so collectively, even with limited resources, we can really be thoughtful and effective with what we want to get done. My job, as I see it, is to lead and support them the best way I can, and not get in their way when I’m not a net positive.

The one other thing I’d say has been immensely helpful in the transition is that, at one point or another, I’ve worked on pretty much everything that my team now does. So I can say with some confidence that I would never ask them to do anything I wouldn’t do.

What are key pieces of career advice for lawyers looking to advance their in house career or transition from law firm to in house?

I was at a law firm as an M&A attorney for six some years and so am a believer that the firm training is incredibly valuable. That said, the transition to in-house, and especially to a start-up, is a mental leap - you’re now responsible for both giving the advice and operationalizing it. That is a truly humbling experience! There’s no way to prepare for it though it helps to get out of the habit of just thinking within the four corners of the document, and beyond that, just understanding how businesses make money and are actually run, what products and services they offer and why.

If you’re in-house, perhaps obvious, but helping to make legal and compliance a part of the company culture is a two-way street. If you’re responsive with your business colleagues and put in the time to think holistically about issues, and include their perspective, they will reciprocate.

Finally, what has helped me along the way is the recognition that you always have a client, somewhere, that wants to hear a solution, not just a problem and a litany of options, and may not even care about how you reached your conclusion. So, trust your judgment and have the courage to state a clear position.

Faraz Rana
Faraz Rana is the Chief Legal Officer at Bread where he's been a part of the team since close to inception. Bread is a technology-driven payments company that works with retailers to personalize payment options for their customers. In his current role, Faraz manages the legal, compliance, and information security functions, and advises on strategic partnerships. Previously, he had been an M&A attorney at a firm in NYC.