Interviewing and Starting a new GC Role in a Virtual World 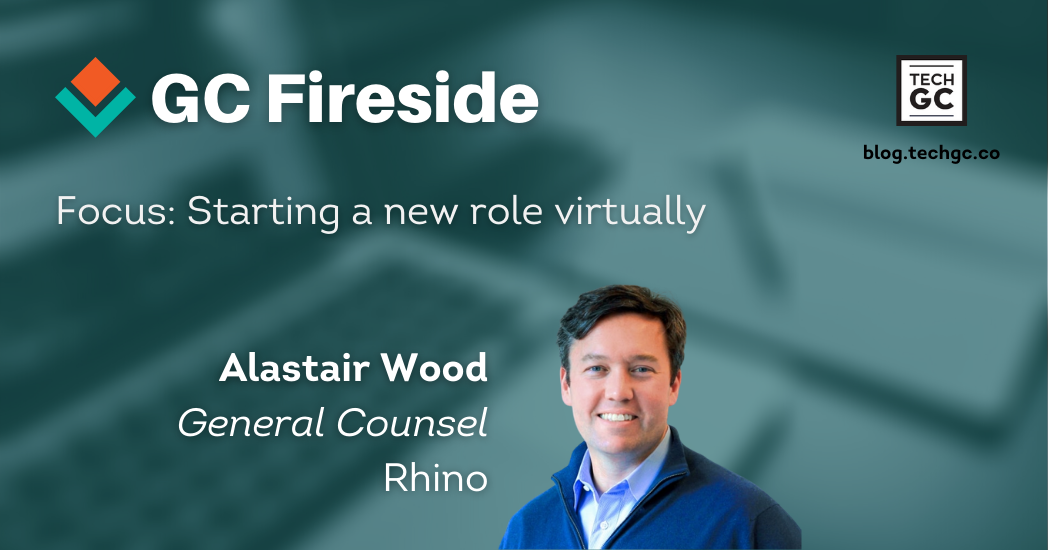 The global pandemic has certainly come with it’s business challenges, but how does it shape the way in house counsel identify, interview, and begin their new role? We sat down with Alastair Wood, GC of Rhino - a FinTech/Insurtech company where he started only a couple months ago. We discuss with Alastair his decision process in joining Rhino, what the virtual interview process was like, and now the challenges Alastair faces in being influential as GC in a remote company.

Tell us the story of  landing at Rhino‍

What initially attracted me to Rhino -- aside from our product -- was the team. There are lots of great ideas out there but, in my view, what separates a great idea and a great company is the team that you put together to execute on the idea. At Rhino, I saw a team that had unparalleled experience building products in the real estate & insurance space, offering regulated products to consumers and scaling and growing startups.

With respect to the hiring process, it started out in early March relatively normally. A few introductory calls with some of the senior leaders followed by plans to come in to meet the team in person….and then the world fell apart. I continued speaking with the team but, like most companies, we went into a holding pattern for senior roles simply because the world was so in flux. Over the next few months, I stayed in contact -- not so much because I expected a role to materialize -- but because I actually enjoyed speaking with them. Eventually we started talking about the role again over the summer and, after meeting more of the team virtually, we all decided it would be a great fit. When I look back on it, I actually think having some time outside of a formal interview process to interact with the team really allowed me an opportunity to get to know them and made me much more comfortable about joining a company where I had never met anyone in person.

How is Rhino currently positioned?

Rhino offers a product that solves a problem most of us can relate to -- we replace the upfront cost of a cash security deposit paid by millions of Americans each year with a low-cost insurance alternative. More than 40% of Americans cite upfront costs as a barrier to obtaining quality housing and over $45 billion in cash is tied up just sitting security deposit escrow accounts. By allowing renters to replace their security deposit with insurance, Rhino helps remove previously insurmountable financial barriers to obtaining quality housing and helps unlock billions of dollars for renters that can be put back into the economy to pay off debt, save for emergencies, or invest.

We have been incredibly fortunate during the pandemic - we have seen continuous month-over-month growth both in the number of customers using our products and the number of apartments which accept them. We recently crossed a milestone and are now in 1 million homes nationwide and have processed $1 billion in lease transactions over the past three years at an average of $913,242 per day. To support this growth, we are working hard to continue scaling our team to set ourselves up for 2021 and beyond.

How do you vet a team/CEO well when it's all virtual?

It absolutely impacts your ability to get a feel for the executive team both individually and as a collectively because you don’t have the chance to see them together within a team environment. I think what helped me take the leap was that I had a series of positive experiences with each of the executive team members that I met. The virtual interview process was probably a longer one than an in-person process but that was actually a good thing. The number of interactions I had with the team, and the fact that they were all positive, gave me confidence that I was making the right decision. At the end of the day however, whether it’s a virtual or in-person process, you ultimately end up making a leap of faith.

How have you built the brand of GC virtually?

I think the lack of natural, organic day-to-day interaction with the entire team makes it hard. As the GC, you tend to deal regularly with the more senior members of the team across various verticals so you start to naturally build out those relationships. But you don’t have the casual interactions with other team members in the elevator or getting coffee that allow you to connect with them. If you have only sporadic or episodic interactions, you end up staying as this unknown new person.

Two things I have found effective to break through this have been:

At the end of the day though there is no simple answer in the virtual world - this takes a lot more effort than when we were in-person but it’s time that is absolutely necessary to spend building a relationship with your entire team.

How will you hire your legal team as Rhino grows?

When I think about the type of people that succeed in the startup space, especially on smaller legal teams, I focus on “varsity athletes” as opposed to subject matter experts. As we all know, the number and variety of issues that we have to confront is almost never ending. I would much rather hire smart, high-performers who I’m confident can flex into new roles and simply figure out how to solve problems that they may never have dealt with before as opposed to subject matter experts that solve just one need. I think flexibility and adaptability are the two of the most crucial characteristics for success at a startup.

I also think it is incredibly important for small legal teams to hire people that are not homogeneous. One of the things I miss most about life at a big firm was the ability to walk down the hall and bounce ideas off some incredibly smart and talented people. When I think about building out a team that will provide that sounding board and challenge to my views, I want people that bring a diversity of ideas, experiences and backgrounds -- otherwise I am just creating an echo chamber for my own views.

Alastair Wood
Alastair Wood is an experienced general counsel with 15+ years experience successfully helping both multinational and startup companies build their businesses while addressing complex legal and regulatory issues. Alastair currently serves as General Counsel for Rhino, a a licensed insurance agency that transacts insurance and gives renters financial alternatives to afford the homes they want.