What’s Happening with VC Financings in a COVID Environment 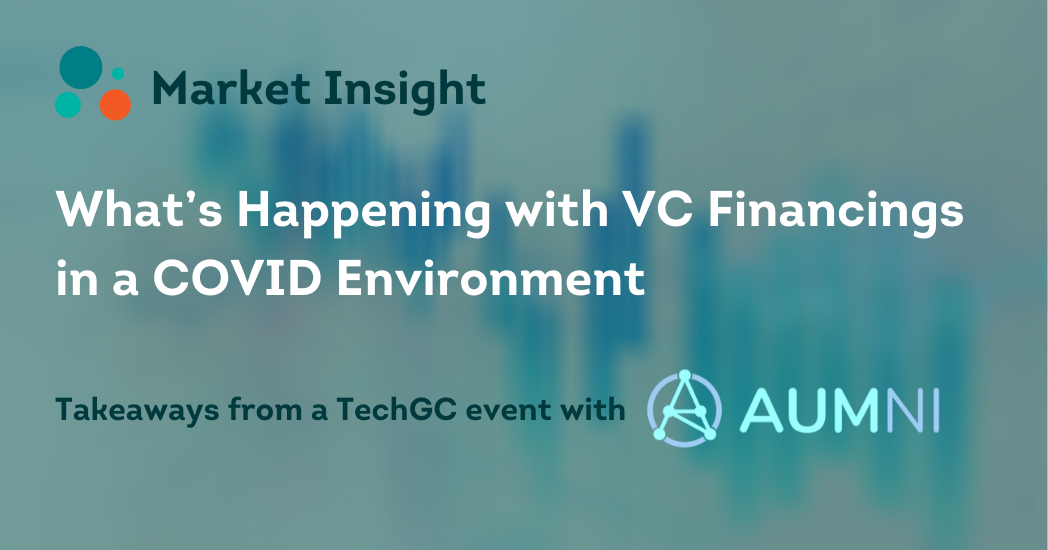 What a year it has been. Given the current economic climate and the unprecedented times we have been living in, it seems every aspect of life as we know it has been affected on a global scale. The pandemic, it seems, has reshaped not only our daily personal lives but it has also changed how we work. And this includes the financing world... but just how much has it changed? Have terms or the process changed? We recently had the opportunity to discuss these questions with Eric Cheung, General Counsel at FirstMark Capital and Evan Bienstock, Partner at Fenwick & West, as part of a private virtual event hosted by TechGC.

What many anticipated may happen when the pandemic started in March was a trend towards investor led deals and falling valuations. Did things go as expected? Not necessarily. Valuations remain strong for strong companies and deal flow is still happening. The firms Aumni spoke with saw a strong January and February and, like most firms, March was a month of triage of portfolio companies. April became a focus on PPE and May and June represented a return too more of a normal average of deals.

Valuations for companies that are doing interesting things and in industries that are growing, or perhaps seeing COVID tailwinds, are still being looked at and funded. Those deals are still happening. Companies that are more risky or at the bottom of the portfolio might have a harder time getting through this time, however. There may be changes in what types of companies are being funded. An example that Evan shared was how Fenwick & West saw a meaningful increase in deals this year in specific segments. Software accounted for 54% of the deals in May, which is up meaningfully from the average from last year and life sciences accounted for 19% which is also meaningfully up from the average. Evan shared that they are seeing some trends in types of clients they are evaluating:

We're seeing a number of health tech, cyber security, home efficiency, prop tech, and some consumer. Those types of industries are faring pretty well right now and what we're also seeing from a type of deal perspective is later stage deals and inside deals seem to be leading the way here a bit. We have seen a bit of a slowdown in seed stage deals, but not tremendous.

Eric Cheung, General Counsel at FirstMark Capital, discussed how since March, about two thirds of their deals were follow-on deals, some of which were to fortify the balance sheet given the current climate, and some with new investors coming in. The rest were investments in new portfolio companies, most of which have been seed deals as opposed to series A deals and a handful were out of the opportunity fund. They have seen a lot of activity on the seed side, probably as a result of the market and partially driven by process as they got more comfortable writing checks just based upon a Zoom interaction.

As it pertains to price, the number of up rounds declined a bit at Evan’s firm. They still saw up rounds account for 67% of the rounds in May, but that did decline meaningfully from the same period last year while the number of flat rounds increased. They are seeing some price fluctuation and softness, and a move toward particular industries.

We are now living in a Zoom world -- what that means for VCs.

The firms we spoke with echoed that they are seeing streamlined term sheets and the speed at which term sheets are being signed as they look for the simplest path forward from handshake to closing, especially for industries experiencing growth such as cloud and SaaS and some consumer companies. There has also been an adjustment to a virtual process given the absence of the traditional handshake and in person meetings at the start of the process. VCs, like many of us, are learning to be comfortable relying solely on virtual meetings. Seeing these Zoom meetings through from beginning to a closed deal will be an interesting case study of the VC process in the current climate as more of those make their way through. This can also increase the competition for some companies. According to Eric:

We've moved more quickly to pull the trigger on term sheets because of the competitive dynamics in the marketplace. Some of the founders who present at our Monday meetings have had back to back partner meetings with other firms. There's no travel. There's no hopping on a plane. There's no driving. You meet with one firm, that Zoom ends and you hop into another Zoom. Their calendars are getting packed and that competitive tension has meant we have had  to move more efficiently and deliberately but that could just be what we're seeing on our end.

The market also has taken an opportunistic turn.

Evan also shared that his firm is getting big deals done and quickly. Founders are being pushed to upsize their deals and take a dilution hit in an effort to get money in the door. In essence, big deals get bigger. Founders may be more willing to take more dilution in order to fortify the balance sheet in the face of the uncertainty of the coming six to 12 months. Having that extra runway is probably meaningful in a world where there's a lot of uncertainty. That uncertainty is also permeating into other facets of the deal process such as the increase in secondary components, from founders and institutional shareholders alike. There has also been some cleaning house going on, as investors look to exit some investments and clean up their venture portfolios.

We can look back to find our way forward: this downturn shares similarities to past ones.

In a recent virtual talk by the chairman of Fenwick & West this spring, he compared this downturn to the one of 2008 and the dot-com bubble of the mid to late 1990s. From the perspective of a lot of VC firms it’s a robust time right now --financing activity is fairly strong. This is consistent with the previous two economic downturns, in that the first six to nine months were actually pretty robust and it didn't really sink in for the private markets until a few months later. This may translate to us seeing more of the effects in 2021. Evan noted that his firm has had a strong first half of 2020, with very strong venture, startup and M&A activity. Surprisingly too, some valuations have remained strong.

Immediately after the economy shut downeveryone was trying to fundraise which may be why we saw a busy April through June. This may mean we will see a softening in summer that is typical of the season. It might also be that less people are looking for series A rounds right now. The next few months, Q3 in particular, will be interesting to see how things shape up. While many of us find ourselves at home, the market is going to respond when we all come out of our houses. Some investors appear to be waiting for the next period results and seeing if they'll hold up before making their moves. Then again we could just all be learning how to get comfortable with the world as we know it today as the new normal.

Pawan Murthy
Pawan Murthy is Head of Marketing for Aumni, an automated investment analytics platform. Pawan has 20 years of experience in early stage and technology marketing, branding and messaging. Prior to Aumni, he has held marketing leadership roles in various startups and large companies such as Discovery and BMW.